Learn about the history of striped and sunshine bass stockings in the St. Johns River. 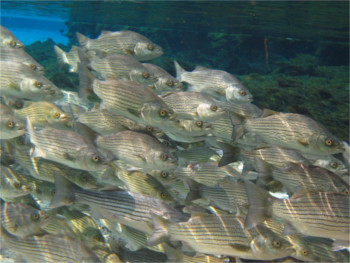 Striped bass (Morone saxatilis) are a popular sport fish and naturally occur from the St. Lawrence River in Canada to the Louisiana Gulf Coast. Established stocked populations occur along the Pacific coast and many inland water bodies across the United States. Florida was home to the southernmost native populations of the Atlantic strain striped bass; however due to degradation of river habitat and water quality, natural reproduction ceased in the St. Johns River by the early 1970s

Striped bass are a cool-water fish and do not survive water temperatures above 80 degrees for extended periods. Warm waters like the St. Johns produce small population numbers that rarely reach more than 20 lbs – a small size compared to their northern cousins which may exceed 50 lbs. Landlocked by high ocean temperatures, they cannot survive in Florida’s warm waters without the numerous springs found in the St. Johns River Basin which provide a cool water refuge during the summer months.

Beginning in the late 1960s, advancements in rearing techniques allowed for intensive culture of the striped bass in Florida.  By this time, state and federal biologists believed that few striped bass were naturally reproducing in the St. Johns River and began developing stocking plans to both restore the species and provide additional angling opportunities.

The first striped bass stocked into the St. Johns River occurred in 1972, and annual stockings continue. In the early years of the program, biologists did not keep clear records of the locations of collected brood fish. Most are thought to have been collected from the Nassau and St. Marys rivers, but fish from South Carolina and Chesapeake Bay were also used. Biologists believe that original native striped bass may have adapted to the slow currents typical of the St. Johns River by producing more buoyant eggs, a trait missing from stocked fish from other areas. During years striped bass stocking did not occur, biologists found no fish from those year classes were present. This supported the theory that no natural reproduction was occurring in the river.

In 1981, further developments in hatchery rearing led to large scale production of the sunshine bass, a hybrid striped bass created using white bass females from Florida’s panhandle and striped bass males from the St. Johns River. These fish exhibit “hybrid vigor”, making hardier fish with improved growth rates and able to withstand higher water temperatures. Generally, white bass females are easier to acquire for brood fish making it easier to get the number of fish needed to create a successful fishery. These fish supplemented the stockings of the Striped bass throughout the 1980s and 1990s in order to provide more fish for anglers.

As state priorities shifted to the conservation and management of other native species within the river, the sunshine bass stocking program was temporarily discontinued from 2000 through 2008. Decreasing numbers of striped bass brood fish during this same period also resulted in lower stocking success. Although striped bass remained a focus for restoration by the United States Fish and Wildlife Service (USFWS), who took over the Atlantic striped bass stocking program from the state in 2009, brood fish availability became less predictable. Environmental conditions such as flood and drought severely impacted the ability for the USFWS to collect brood fish from South Carolina. Due to angler demand, officials reintroduced sunshine bass stockings to increase angling opportunities.

In total, the Florida Fish and Wildlife Conservation Commission (FWC) and USFWS have stocked over 20 million striped bass and nearly 10 million sunshine bass in the last 40 years.  As part of a joint agreement in 2009 between the FWC and the USFWS, biologists with FWC’s Fish and Wildlife Research Institute (FWRI) at the DeLeon Springs Freshwater Fisheries Lab continue to monitor survival and angler catch data each summer. At accessible locations, fish utilizing the large springs as thermal refuges are counted and photographed and creel surveys are conducted to estimate angler catches. Monitoring allows researcher to detect changes in populations and habitats so that adjustments can be made to stocking requests.