Largemouth bass were stocked in Lake Talquin, Florida, from 2000 to 2002. This study evaluated those efforts. 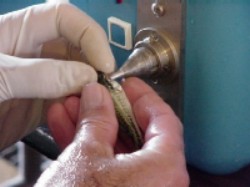 Largemouth bass stocking has been a hot topic of discussion for many years because of variable levels of success. The reasons for failure and success have been poorly documented and reported. In Florida, stocking 1- to 2-inch bass into established populations has never achieved much success. Survival of hatchery-reared bass stocked into wild populations has been poor. In Florida, shallow water, abundant submersed aquatic vegetation, and good recruitment of bass to the fishery make most waters poor candidates for stocking-unless a disaster occurred. There are, however, several Florida lakes that have degraded water quality, which results in limited aquatic submersed vegetation. This makes them potential candidates for a bass-stocking program.

Factors critical to stocking success are healthy fish, timing, bass size, abundant food supply, and sufficient numbers to affect the fishery. Recent information suggests stocking 3- to 5-inch bass in waters with sufficient food and limited vegetation has been successful in some states. Stocking larger-sized bass bypasses the early life history phase (fry to 3 inches) when fish suffer significant mortality without adequate nursery habitat, cover, and food. This life history window is often referred to as a "bottleneck" because conditions that are conducive to survival are very limited, resulting in high mortality of newly hatched fry and 1- to 3-inch fish. Waters with low numbers of natural age-0 bass have a higher chance of success if larger-sized hatchery bass are stocked.

Lake Talquin (25 miles west of Tallahassee) is an 8,800-acre reservoir formed in the late 1920s by damming the Ochlockonee River. This productive reservoir has an abundant supply of shad (critical largemouth bass prey). However, Lake Talquin is deeper than most Florida waters and does not support the extensive aquatic vegetation that is important to early bass survival and recruitment. As a result, most year classes of bass are marginal to poor except following extreme, habitat producing drawdowns of the reservoir. Largemouth bass usually do not spawn until late March or April in Lake Talquin, which is often too late to take advantage of the abundant shad produced in April and May. Shad spawned in the spring quickly outgrow young native bass because of slower bass growth. Since stocking largemouth bass in Florida has never had any prolonged success, researchers' first priority in 2000 and 2001 was to observe whether hatchery bass would survive and feed on age-0 shad in Lake Talquin.

To evaluate any stocking program, biologists must be able to identify hatchery fish. Microwire tags (a tiny, magnetically charged wire placed into the cheek area) have allowed for easy identification of stocked fish. Unfortunately, it is difficult to microwire tag fish in a timely fashion. As a result, biologists have only been able to tag a portion of the hatchery bass stocked and estimate the remaining hatchery fish contribution based on size distributions and age. Recently, however, biologists found that microwire-tagged hatchery bass released in Lake Talquin have a unique mark on their otoliths (ear stones), which has allowed Florida Fish and Wildlife Conservation Commission personnel to discriminate hatchery bass from native fish. In April 2000, approximately 100,000 advanced 3- to 4-inch largemouth bass were stocked into Lake Talquin. Of those, 8,000 were microwire tagged. By October 2000, stocked fish made up 39% of the weak 2000 year-class and had substantially outgrown the native fish. In April 2001, approximately 141,000 largemouth bass were stocked in Lake Talquin, and 25,000 were microwire tagged. The results were similar to the 2000 stocking effort. Researchers also conducted a food habit comparison of native bass and stocked fish. Stocked hatchery bass consumed shad more often in all months studied compared to native bass that preyed upon smaller mosquito fish, grass shrimp, and insects. Just as in 2000, by October, native fish were much smaller than the stocked fish (5 inches versus 7.8 inches). Thirty-two percent of another weak year class was made up of hatchery-stocked fish.

Based on historic information, biologists estimated that at least 25 advanced fingerling bass/acre should be stocked in order to increase numbers of bass in Lake Talquin. By April 2002, hatcheries were able to provide the recommended stocking density (number of fish for a given amount of area) of 25 bass/acre, and 216,000 largemouth bass were released into Lake Talquin. About 26,000 of these bass were microwire tagged. A second food habit comparison conducted between native and stocked bass in 2002 provided similar results. Shad was again more prominent in the diet of stocked fish. Native bass continued to feed extensively on grass shrimp and insects. Because of this disparity in diet, by October, stocked fish had outgrown the native fish 206 mm (8 inches) to 117 mm (5 inches). In all three years, most young shad grew too fast for the native age-0 bass to eat during their first year, which is what scientists hypothesized would happen. By October 2002, hatchery-stocked bass consumed shad, grew rapidly, and made up 40% of a marginal-to-weak 2002 year-class.

In terms of the fishery, stocked bass were estimated to make up 28% of all the bass caught (N = 330) in two largemouth bass tournaments (12-inch minimum length for tournament weigh-in) during spring 2004. The contribution of hatchery bass to the angler harvest in these two tournaments was 39% of the catch if only fish of ages less than or equal to 4-year-old bass were examined (stocking only occurred during four years). Monitoring future tournaments for microwire tagged bass will provide additional information on the contribution of hatchery bass to the fishery.

Today, all largemouth bass stocked in this state are the Florida subspecies, which is a unique genetic variety, historically known only to Florida. Florida bass can easily grow to trophy sizes, so biologists have stocked this subspecies into many other parts of the country. By stocking only Florida largemouth bass, the prevalence of this unique genetic makeup in Florida waters should remain constant.

In summary, approximately 457,000 advanced-fingerling Florida largemouth bass were stocked into Lake Talquin from 2000 to 2002. By October of each year, 32% to 40% of the age-0 bass year classes were made up of stocked hatchery fish. The 3-4-inch hatchery bass took advantage of the abundant supply of shad, which resulted in good growth and survival. By spring 2004, hatchery largemouth bass made up 28% of all bass brought to the weigh-ins of two large bass tournaments on Lake Talquin. Stocking the appropriate-sized, advanced-fingerling largemouth bass can increase the numbers of young bass in a water body that has little, quality, vegetated habitat but an abundant food supply.