FWRI researchers have completed a four-year study looking at the consequences of bed fishing. 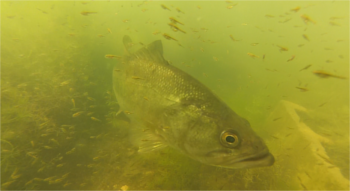 Over the last four years, Florida Fish and Wildlife Conservation Commission (FWC) biologists studied the effects of bed fishing on Florida’s largemouth bass populations. This topic has been stressed by the angling community, and freshwater fisheries researchers were more than happy to tackle this hot-button issue.

Bed fishing is the practice of fishing bass nests in the spring. Nests can typically be seen from the surface as cleared patches near structure. Male bass instinctively defend their nests, giving anglers a higher chance of fishing success. However, while the adults are off the nest, predators such as bluegill and other panfish eat the eggs and bass hatchlings. The debate over this fishing tactic is whether or not this time taken away from the nest, sometimes hours in tournament conditions, is negatively effecting Florida’s bass populations.

The study began at the Florida Bass Conservation Center near Webster, FL. Each mature bass received a tag and fin clipping for identification and tracking their parental contribution using genetic analysis. In preparation for the bass, hatchery staff placed brush and concrete blocks in the ponds for added spawning habitat along with a stocked fish community to provide food for the bass and nest predators and to simulate a natural water body as best as possible. After the fish were acclimated to the controlled hatchery ponds, biologist performed snorkel surveys to count, mark and track the bass beds. After beds were located, biologists collected five to ten eggs from each active nest for DNA analysis. Using the DNA data from eggs on a nest, biologists tracked how many times each individual male and female bass spawned throughout the spring.

Half of the ponds were fished and caught bass were removed from the nesting area for one hour to observe the impact. After that hour the fish were returned to the pond safely. The other half of the ponds were never fished and only observed on schedule. In the fall, the ponds were drained and all the fish collected. Using genetic analysis of fin clips taken from all young bass documented during the year and comparing it to the known adult bass in the pond, biologists identified which mature males and females contributed to the year class produced. With the angling data, biologists also determined if fish that were caught during the study successfully contributed young bass or see if it was only fish that were not caught that contributed.

This study was repeated with slight alternations in small natural lakes in the Ocala National Forest over the next two years to look specifically at individual nest success rates in the wild.

After four years of research, biologists found that bed fishing has very little impact on how successful individual nests are or the numbers of next generation of bass produced. Fished or unfished, only 30% of all wild bass beds succeeded in this study. The only effect bed fishing had was under high fishing pressure. Under high angling pressure fish may not spawn as many times as unfished populations, but this result was only seen in the relatively small (one acre) hatchery ponds. The number of young bass produced was still unaffected and even bass caught multiple times went on to contribute as much as fish that were never caught. FWC freshwater fisheries researchers would like to thank the many anglers who have requested this study. FWC works for you as much as they work for Florida’s fish and waterways.