This study evaluated the success of gravel beds to attract sunfish for anglers. 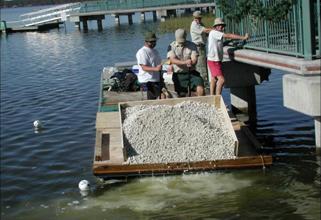 The Eustis Lake Walk pier (ELW) is located on the east shore of Lake Eustis in Eustis, Florida (Lake County).  The pier is popular with black crappie (Pomoxis nigromaculatus) anglers during the winter but receives little angling pressure during the late spring and summer.  In an attempt to boost angling pressure for the under-utilized sunfish (Lepomis sp.) population, the Florida Fish and Wildlife Conservation Commission (FWC) designed a study to evaluate the use of gravel for attracting sunfish and improving anglers' catch and participation.

Various concepts of using gravel for attracting sunfish were tested for a year beginning in the spring of 2004. In November 2004, gravel was placed along the ELW pier in twenty frames. Each frame was 3.05 x 3.65 meters and constructed of 5 x 15 centimeter pressure treated wood.  Ten frames were placed on the north end of the ELW and the other ten were placed along the south end.  Lime rock (No. 57) and quartz river gravel (No. 7) were each placed in ten randomly assigned frames. There were five frames at each location, and the depth of the gravel averaged 10 cm in each frame.

Timed electrofishing samples were collected around the ELW during May and  June 2004, prior to the gravel installation, and again for the same time period the following year after the installation.  Sample sites were divided into two categories: areas designated for gravel installation which were located on opposite ends of the pier, and control sites in areas that were to remain natural.  Each site was sampled and all sunfish were collected, measured for total length, and released unharmed.

Electrofishing samples along the ELW indicated the gravel attractors were effective in concentrating sport fish. Catch rates of sunfish increased significantly from 2004 prior to the installation of the attractors (23.9 fish an hour) to 2005 following installation (501.1 fish an hour).  The catch rates following installation were also higher than those observed in the control sites after the attractors were installed.  Bluegill dominated the sunfish catch from the attractor sites in both years. Remarkably, in 2005, the year following the establishment of the gravel beds, 96 percent of the sunfish caught were bluegill.

In addition to electrofishing sampling, hook-and-line samples and angler interview data were collected.  A stratified, roving creel, also called an angler survey, was conducted on the ELW during the months of May and June in both 2004 and 2005 to assess changes in angler catch.  Twenty-one days each month were randomly selected to perform total angler counts during a randomly selected hour interval each day.  Interviews were conducted to obtain catch and effort information.  These surveys indicated that the amount of hours, or effort, anglers fished for sunfish increased by 253 percent from 2004 to 2005.  Angler catch rates for sunfish on ELW also drastically increased from 0.54 fish an hour in 2004 to 2.56 fish an hour in 2005.

Weekly sunfish hook-and-line samples were collected by FWC staff from April 28 to June 24, 2005, to determine if angler catch rates differed between the two gravel types.  Each angler was assigned three randomly-selected attractor sites of each gravel type and given 15 minutes of angling time per site.  However, statistical tests indicated that there was no significant difference in the number of sunfish caught from the two types of gravel.

In short, the installation of gravel beds on ELW was successful in attracting sunfish species.  Angler participation and catch of sunfish drastically increased in gravel areas, but there was no significant difference in the number of sunfish caught from the two types of gravel.  Therefore, the less expensive No. 57 lime rock is recommended for use around public docks, boat ramps, and seawalls to improve sunfish catch for anglers.

After presenting these results to a regional meeting of fishery scientists, at least four other states are now investigating the use of gravel for attracting sunfish.