This study assessed the effects of a gizzard shad removal project on redear sunfish populations. 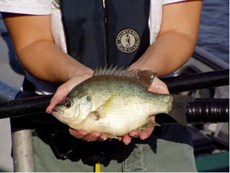 In 1993, the St. John's Water Management District (SJWMD) began a commercial shad gill netting program on Lake Apopka, which was monitored by the Florida Fish and Wildlife Conservation Commission (FWC). The SJWMD claimed that gizzard shad (Dorosoma cepedianum) resuspend phosphorus from the lake bottom into the water column. Resuspended phosphorus occurs when shad eat and disrupt the bottom, which causes the sediment and the phosphorus particles to suspend into the water column after they had previously settled. The resuspended phosphorus is then used by planktonic algae, resulting in excessive algal blooms.

Before biologists can attempt to assess impacts on redear sunfish, some preliminary data must be collected to learn more about the fish population. Basic characteristics of interest are abundance (index of how many fish are in the lake), growth (how fast the fish are growing), and condition (how heavy they are for their size).

Electrofishing is a method often used to obtain this information. This practice allows fish to be collected, measured, and released unharmed.  Redear sunfish were collected from Lake Griffin between May 18 and July 1, 2004 by using a standard electrofishing technique drafted by the FWC. All redear sunfish were measured and weighed. A subsample was then collected to determine age and gender.

Electrofishing catch rates for Lake Griffin were low, as 36.3 hours of sampling were needed to collect 471 redear sunfish. Redear catch rates, which measure the number of fish collected per hour of sampling, were 13 fish an hour for all fish and eight fish an hour for fish at least six-inches in length. These values were low compared to a recent University of Florida study of 60 lakes in Florida, which reported an average catch rate of 49 fish an hour. In a FWC statewide database of 35 lakes, the average catch rate was 56 fish an hour. Therefore, the Lake Griffin redear population in the spring of 2004 was estimated to have relatively low abundance compared to other systems in the state.

To assess the condition of fish in a population, we use a measure called relative weight (Wr). Relative weight is the ratio between the weight of a fish and a standard weight obtained from many other populations. It is presented as a percentage, and the higher the value, the better the fish's condition relative to other populations. The average Wr for Lake Griffin redear sunfish was 107 percent, which is average for similar systems in the FWC database but slightly higher than the state mean of 92 percent. The Wr values were particularly high for Lake Griffin redear sunfish that were larger than six-inches in length, which indicates an abundant food supply for adult sunfish. However, relatively lower values were found for smaller individuals, which may indicate that there is a food shortage problem for smaller fish.

We also examined the growth of individuals in the population. Redear sunfish grew rapidly at Lake Griffin, particularly for fish at least two-years old. The mean size for fish ages 2- to 5- years old was substantially higher than those of the FWC statewide redear sunfish database and previous samples collected in 1997 from Lake Griffin. Unlike 1997 when first-year growth was found to be limited, recent data indicated the most growth generally occurred during the fish's first year.

From the information we have gathered, we have determined that there is a low abundance of redear sunfish in Lake Griffin, but the growth and condition of these fish were generally good, particularly for adult fish. Low condition values for smaller individuals may indicate that there is a problem in the amount of prey available for these fish.

Similar data were collected from other lakes in the Ocklawaha Chain of Lakes, including Lakes Dora, Beauclair, and Eustis. Additional sampling is scheduled for May 2007. Lakes Dora and Beauclair were opened in March 2005 to commercial harvest of gizzard shad, and Lake Eustis will serve as a control (no harvest) lake. This information will allow biologists to examine redear population dynamics prior to gill net fishing and help biologists determine if and how the gill-net fishery for gizzard shad is impacting the redear population in these lakes.