Anglers describe their fishing habits to aid biologists in researching and monitoring the recreational fisheries at Lakes Dora and Beauclair. 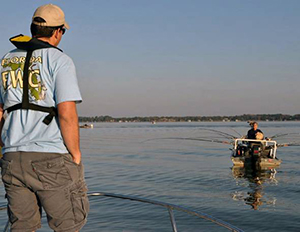 Communities benefit when sport anglers invest time and money fishing local water bodies. Thus, it is important to assess the performance of a local fishery, and to help do that, biologists with the FWC's Fish and Wildlife Research Institute (FWRI) conduct angler surveys. These surveys provide valuable information on how many people are fishing, what kinds of fish they are targeting, and how many they are catching. In these surveys, biologists get their data directly from the key players in the fishery: anglers themselves. Using FWC's data on fishing expenditures and adjustments for inflation, biologists can also produce estimates on the economic value of a fishery.

Since 2004, angler surveys have been ongoing at Lakes Beauclair and Dora in central Florida's Harris Chain of Lakes. Data collected from November 2010 through April 2011 indicate that anglers

The data show that black crappie continues to be the most popular sport fish in Lakes Dora and Beauclair. Studies have shown strong numbers of young black crappie will soon enter the fishery, so the quality of this sport fishery should remain high for these two lakes in the coming years.