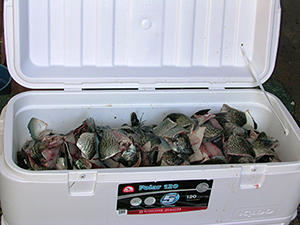 Every winter, seasonal residents flock to central Florida fish camps to relax with a rod and reel. Often the reason they come is black crappie: a reliable source of seasonal income for many local businesses and a sought-after species throughout the state.

Biologists with the FWC's Fish and Wildlife Research Institute (FWRI) study the crappie fisheries in the Harris Chain of Lakes and other lakes in central Florida. To aid in the management of these lakes, biologists place coolers at fish camps and ask anglers to discard carcasses of filleted crappie in them. Several times a week from January to March, biologists return to the fish camps to exchange coolers and take carcasses back to FWRI's Eustis Fisheries Research Lab in Lake County for measuring and analysis.

Data gathered from 2009 through 2011 were recently analyzed for the crappie harvested from lakes Dora and Griffin in the Harris Chain (Tables 1 and 2). Reported carcass lengths reflect what anglers caught and kept for fillets.

Biologists also observed differences between the two fish camps on Lake Griffin, designated "A" and "B."

Researchers are not sure why differences have developed at the three fish camps. The reason may have less to do with the crappie than with the anglers catching them.