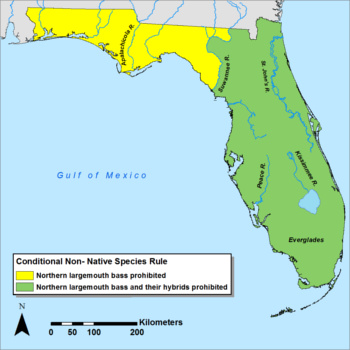 Florida bass, Micropterus floridanus, have a small natural range; they are only native to peninsular Florida. This species grows larger than any other black bass, which is a big part of the reason they are the premier freshwater sport fish in Florida. Recognizing the ecological and economic value of genetically-pure Florida bass, FWRI biologists conduct research to help prevent these bass from mating and producing hybrid offspring with non-native northern largemouth bass,M. salmoides.

The taxonomy of these two bass sparked a debate amongst scientists for more than a decade. The Florida bass and the northern largemouth bass look very similar, but do they represent different species or subspecies? They were originally described as subspecies of largemouth bass in 1949 and the American Fisheries Society (AFS) has continued to use this terminology – until recently. Many scientists have become convinced that the Florida bass is a distinct species based on genetic, behavioral, and environmental preference/tolerance differences.

During a statewide genetics study, scientists analyzed bass collected from 48 lakes and rivers throughout Florida. The sampled water bodies included populations of pure Florida bass and intergrade (or crossbred) populations where Florida and northern largemouth bass mixed or hybridized. Populations of pure Florida bass were found south of the Suwannee River, while intergrade populations were located in northern and western parts of the state. This led the FWC to amend a rule to designate pure northern largemouth bass as a conditional species (dangerous to native ecosystems) south and east of the Suwannee River. This was intended to prevent this non-native species from being moved into the range of pure Florida bass in peninsular Florida by anglers, private pond owners, or fish dealers.

The FWC is dedicated to preserving the long-term well-being of fish and wildlife resources. To that end, the agency designated four geographic regions of the state as Florida bassGenetic Management Unitsafter research indicated that bass in each area had unique genetic compositions. When FWC is stocking hatchery bass or relocating wild-caught bass, fisheries managers avoid transporting bass betweenGenetic Management Unitsto avoid mixing gene pools. FWC takes this precautionary approach when moving bass because research has shown that fish have adaptations that help them survive and reproduce in the environments in which they naturally occur.

Biologists collect tissue samples from fish in the wild and at the hatchery and send them to the FWRI fisheries genetics laboratory for analysis. Geneticists at FWRI developed a set of molecular markers that are able to effectively identify each species of black bass and detect individuals that have hybrid ancestries. The geneticists work with the Richloam Fish Hatchery staff at the Florida Bass Conservation Center to conduct genetic testing that makes sure that only pure Florida bass are allowed to spawn at the hatchery. This ensures that only pure Florida bass are released into water bodies during stockings. Geneticists are also able to determine whether a bass collected by a biologist in the wild was produced at the hatchery. Resource managers can use this information to determine the survival rate and contribution of hatchery fish after stocking.

Since its creation, the bass genetics project has expanded to include research on all the black bass species that are native to Florida, including Suwannee bass, shoal bass, and the newly classified Choctaw bass. These studies will provide resource managers with information they can use to protect the genetic integrity of native species by preventing or minimizing the chance of hybridization with invasive species.