The Choctaw bass, which was long mistaken for spotted bass, is found in coastal rivers along the Florida Panhandle and southern Alabama. 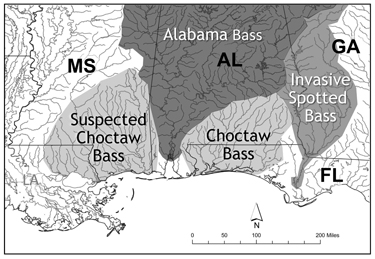 Sometimes organisms are so similar in appearance that members of two different species are considered to be the same species. This was the case for a newly discovered member of the black basses – the Choctaw bass, Micropterus haiaka. For decades, biologists and anglers had not realized this bass, which inhabits coastal river systems in the western Florida Panhandle and Alabama, was actually distinct from one of its relatives, the spotted bass.

If not for a Fish and Wildlife Research Institute (FWRI) genetic study involving other basses of the genus Micropterus, Florida’s newest native bass species might have eluded detection even longer. While testing specimens from northwest Florida’s Chipola River in 2007, FWRI scientists encountered a DNA profile that did not belong to any known bass species. To locate its source, they began testing archived bass tissues collected from nearby rivers.

By early 2009, scientists had discovered the same genetic profile in bass populations inhabiting the Choctawhatchee, Yellow, Blackwater, Escambia, Conecuh and Perdido rivers. After reinterpreting work done in 1940 by taxonomists Carl Hubbs and Reeve Bailey, scientists believe Choctaw bass could also occur in extreme southwest Alabama and southeast Mississippi, just west of the Mobile River Basin. Since 2012, they have been working to confirm this.

The scientific criteria for recognizing a new species are rigorous and the formal taxonomic (classification) process is ongoing. Fortunately, the genetic and morphological (regarding form and structure) evidence assembled by the FWRI research team leaves little doubt that fish with this new genetic profile constitute a valid species. Choctaw bass can usually be distinguished from other basses by counting scales, fin rays and gill rakers, which are comblike projections inside the gills that prevent particles from collecting on the gill filaments. Foolproof identification, however, requires genetic testing.

The name recommended for this new species – Choctaw bass – reflects its geographic connection to the indigenous range of the Native American Choctaw tribe. The provisional scientific designation “haiaka” comes from the Choctaw language and means “revealed” or “manifest.” Researchers believe it is a fitting label as they did not set out to discover a new bass species.

Now that this native bass is known, scientists want to ensure the population remains healthy by implementing the best possible conservation management practices. Ironically, the biggest conservation threat to the Choctaw bass may come from its cousins, spotted bass and Alabama bass. Typically, Choctaw bass have been found in the upper reaches of rivers and streams where sediment accumulates, avoiding stream headwaters and tidal zones found closer to the coast. As of late 2012, everywhere Choctaw bass had been collected, spotted bass and Alabama bass were absent. This is encouraging because these bass species are often introduced outside of their native range to expand fishing opportunities, which can displace native bass populations in other freshwater systems and, in some cases, allow introduced species to genetically overtake native basses through hybridization (interbreeding). Florida and Alabama now have regulations preventing fish introductions and relocations.

Additional information may be found in the following publications: