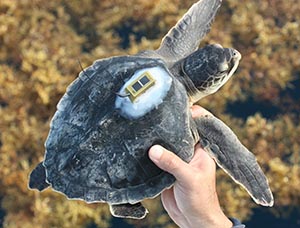 When sea turtles hatch, they make their way to the shoreline as incoming waves sweep their tiny bodies out to sea. The journey begins as they search for food and shelter in the open ocean.  Historically, the early life stages of these animals have been unknown. Where do baby sea turtles go after departing from the nest? Researchers are finding that these animals seek shelter near the water’s surface.

Floating on top of the ocean are ecosystems made of natural and manmade debris. Offshore in the northern Gulf of Mexico scientists search for these drifting habitats, mostly comprised of Sargassum spp., a type of brown macroalgae (seaweed). When researchers see a turtle, they scoop it up with a long-handled dip net.

Once a turtle is captured, scientists attempt to learn as much as possible from it. Each turtle is measured and weighed; samples are collected to understand its diet and genetics. Some turtles will have a miniature, solar-powered satellite transmitter attached to each shell to track the turtle’s behavior and movements. In the lab, GIS and remote sensing techniques help the team visualize and count habitats. From the satellite tracks, scientists can learn how they move and associate with their temporary sea-surface habitats.  Currently, the research team is focused on satellite tracking the rare Kemp’s ridley sea turtles (Lepidochelys kempi), however, the project has documented four different species of young turtles within the northern Gulf of Mexico. 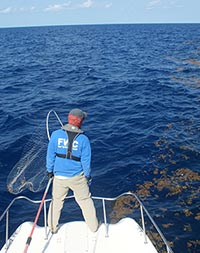 This study began in 1992 and is currently funded by the National Oceanic and Atmospheric Administration’s Fisheries' Species Recovery Grant. This ongoing project provides conservation managers with detailed information about the distribution and abundance of sea turtles within the northern Gulf. The Deepwater Horizon oil spill in 2010 directly affected animals such as sea turtles and their habitats. This information is critical for understanding the impacts of oil spills and other factors while monitoring the success of subsequent restoration efforts.

This project is led by FWRI scientists Tomo Hirama, Robert Hardy, and Simona Ceriani, and Dr. Blair Witherington, a biologist with University of Florida's Archie Carr Center for Sea Turtle Research and Disney's Animals, Science, and Environment. Dr. Chuanmin Hu enabled the team to incorporate remote sensing techniques into this research through the Optical Oceanography Laboratory at the University of South Florida's College of Marine Science.

Additional Information
View a Flickr photo album about this project.