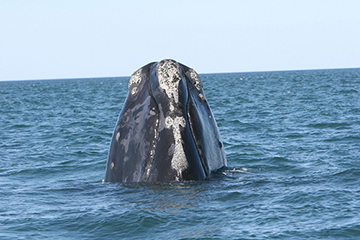 With a population estimated at approximately 500 individuals, the North Atlantic right whale is one of the most endangered large whales in the world and the southeastern U.S. is their primary calving area. Since 1987, the Fish and Wildlife Research Institute (FWRI) has carried out right whale research, rescue and monitoring efforts to aid recovery of the species. Most of this work is supported by grant funding provided by the National Marine Fisheries Service (NMFS).

FWRI is one of a handful of major contributors to the North Atlantic Right Whale Catalog. Photographs taken by staff are used to identify individual right whales based on the callosity pattern (a natural growth of rough, cornified skin) on their heads as well as human-related scars. Over time, population vital rates such as survival, reproduction and trends in health are monitored in part through this photo-identification research and genetic sampling. FWRI has also worked closely with partners to compile years of aerial survey effort and sightings data into a geographic information system (GIS). Analysis of these spatial data help scientists and managers to evaluate and predict right whale distribution patterns in the calving grounds in relation to environmental factors such as sea surface temperatures, water depth and human activities, such as vessel traffic.

Vessel collisions and entanglement in fishing gear are the leading known causes of death in this species. Scarring studies show that more than 80% of the right whale population has been entangled at least once. Right whales are generally strong enough to break away from anchoring gear and are typically found free-swimming with rope fixed in their mouth through their baleen, around their head, and wrapped around their flippers. Right whales can carry this gear hundreds of miles over months, or in some cases years, before either shedding the gear, being spotted and disentangled, or dying from their injures or starvation. FWRI is a member of the Atlantic Large Whale Take Reduction Team which was established by NMFS to help develop take reduction plans that mitigate the entanglement risk to large whales. 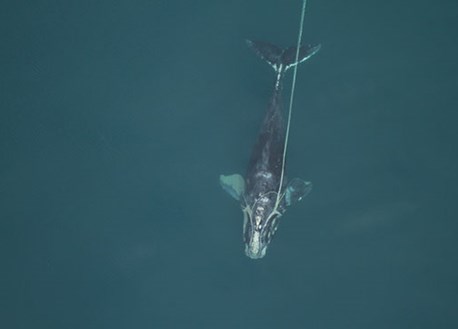 Catalog #3911, a two year-old female, photographed with a complex entanglement in December 2010. Over three weeks, the disentanglement team worked to cut knots and removed all the trailing rope. Unfortunately, her injuries were too severe and she was found floating dead in February 2011.

The whalers would attach barrels or logs to their harpoon line to slow the whale, keep it near the surface, and tire it. Disentanglement involves establishing a control line where buoys and drogues can be attached to add buoyancy and drag, but are also easily removed. The disentanglement teams work from small boats and use customized tools in order to establish working lines and strategically cut the entangling ropes.

Over the past 30 years the ALWDN has developed new techniques and tools and has expanded up and down the eastern seaboard, successfully disentangling hundreds of large whales. In addition to freeing animals from entanglement, the network stresses documentation and gear recovery; both are used to assess the prevalence and impact of gear interactions as well as management strategies to prevent entanglement.